It’s described as the ‘Venice’ of Buenos Aires. Tigre is an hour north from Buenos Aires and although some of the locals weren’t overly keen on the town they encouraged me to go see it! At first I found this a little bit strange, but as soon a we arrived I could see why some locals had reservations…

Lets start with the journey – I’d arranged to meet some fellow CSers, all of whom were Argentinians at Retiro station. It’s the easiest and probably cheapest way to get to Tigre. As usual (as most of my friends can guess) I was late, but like true Argentinians the expected this and my guides had waited for me! Miguel and Luca were 33 and 24 respectively and although both had been to Tigre years before, they were keen to revisit the area and even more keen to show me around! I use an exclamation mark because I’m from London and I don’t think I’ve experienced this type of hospitality in all of my 34 years!

We formed a very civilised queue on the platform among with the other commuters – again something I hardly ever see in London.

On the train we talked about what we all did for work and then they both started telling me about all the places I should try and visit during my stay!

So the lady sitting next to us had joined in the conversation – obviously we were talking in English and she just happened to be an English teacher! She threw in some more sights I should see as well as a couple of restaurants! Could this place be anymore different to London?

We passed shanty towns, beautiful scenery and finally our 45min commute was over. Once we arrived at Tigre station the three of us (our English teacher had left us ages ago) we walked out of the station like a scene from the three amigos! Neither of knee where we were going or how to get there. The one thing I did recall was that the tourist office was near a Macdonalds (thanks to this website) We walked over and found a great high-tech tourist information office with loads of automated route planners. At this point I should probably explain that Tigre is made up of loads of rivers/ which divide it up into deltas. These can be traversed depending on how fit you are by speed boat, river bus; kayak or row boat!

We chose neither. We decided to do one of the walking tours… We collected a printout of the route map and went on our way… Tigre itself looked beautiful! Green trees, grease, clean streets, it was very much a tourist spot. Immediately I could see why some of the locals had not been overwhelmed by the thought of coming here a – basically it was their equivalent of Southend on sea – albeit a million times more beautiful and hot!

The first stop was at the Mates museum! It’s the only one in the world! Mates is a traditional Argentinian drink – as well as Uruguay, southern Brazil and Iran and Syria! It’s like tea, but you drink it and share it with friends – a tea type shisha if you will. You can get different strengths/types and everyone makes their Mates differently.

After a walk around the small but interesting museum, the owner treated us to a cup of Mates- my very first! And who better to share it with than with new friends!

As the new liquid touches my tongue it tastes bitter, almost as though I’ve crunched up some cigarette butts and mixed them with water. But I persist… There’s a great tradition that goes with making and then drinking Mates and each person has their own style. Some people even add sugar, which I must say in my opinion makes it taste good!

After a whirlwind tour of the museum (as only three guys can do) we decided if was off to find some food and then to the supermarket to get a few beers! Perfecto!

After a second bottle, we strangely meet another couch surfer who somehow missed our train, but decided to head to Tigre anyway.

After only completing half of one the suggested walks due to the fact that it was absolutely roasting, we decide to head to the slightly cooler shady climate of the local Casino and amusement park (now you kind of understand why I compared it to Southend-on-sea)

The amusement park is cheesy, one very tame roller-coaster, a Ferris wheel and a few candy floss stalls! We immediately head to the casino!

Are you feeling lucky punk?

We head to the roulette table, none of us really taking anything very seriously- the beer and sun have seen to that! We decide to each put in 50 Pesos, about £6, and begin placing chips of random numbers.

Before we even realise it we’re up! We’re doing pretty well on the numbers and more seasoned gamblers begin to join us… Things are going great while we try and figure out exactly how we manage to to keep winning! And just then, light a boot of lightening we begin to start loosing! It doesn’t seem to matter where we put our bets, our luck has definitely run out! So unlike the woman we saw continuously playing the slots and the hoards of people throwing their money away, we decide to cut our loses and head home!

A quick stop for a celebratory beer and we board the train back to Retiro. The train is packed and people sit on the floor while we wait for what seems like an eternity before the before the driver decides that he’s actually got to get home too!

Back in Buenos Aires we continue the celebrations with a trip to Plaza derogge in San Telmo. We watch some live music as people sit, eating and chatting.. Before long we’re all ready to to head home it’s been a long day! And tomorrow I have my ‘bus’ journey! 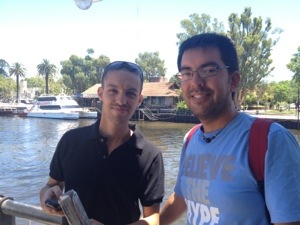 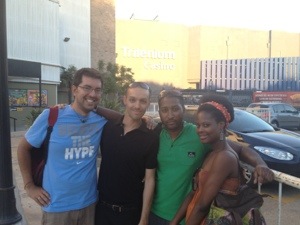