Hello. So for those that have started to read and follow my blog thank you! It’s greatly appreciated.

Thanks also for the feedback – it’s nice to know you care enough to send me your thoughts. With that in mind I’ve decided to write a little more detail. I’m using my phone to blog and it’s sometimes difficult to judge just how much I’ve written – after all I don’t want you to get bored! 🙂

After my first steak at Miranda I decided to wander around the local area of Palermo and take in some of its wonderful nightlife. It was nearly 12am on Sunday when I left the restaurant and began my walk along Fitz Roy. Instantly I was transported to Ocean Drive in Miami… Bars littered every corner and crowds were starting to gather at their favourite drinking holes to begin their evenings.

But it wasn’t just the bars that were buzzing, the restaurants were very much open too! None of this – the only thing you can eat after 1am is a ‘dirty kebab’ or greasy chicken business – these were proper restaurants, with proper kitchens and chefs!!! No spotty teenagers serving cheap hamburgers here!

I was surprised, friends had told me that Buenos Aires is a city that never sleeps, but I really didn’t imagine it would be this awake!

So now squeezing my way through the crowds I came across a bar (the name escapes me right now). It was just off Fitz Roy and looked pretty cool. I was greeted at the door by a friendly guy, and after a few moments of ‘habla ingles’ he somehow managed to explain to me that there was a one drink minimum and that they had a number of special deals on – 3 Moijitos for 100 pesos being the one that instantly caught my eye! THREE Moijitos for £12!!!!!!! Thanks very much, where can I sit!?!? 🙂

So I pull up a table in the bar and look around at the clientele… They’re all Argentinians, or at least all Spanish speaking. It’s the first time I’ve been to a bar/club alone, but it’s cool – the waitress brings me my cocktail and we have a chat in broken English, the bouncer comes over to say hello… And then the promoter sits down next to me. We talk for a moment, about England and what’s good for me to go and see in Buenos Aires, and then he asks the question… You for karaoke? Haha I as in the local karaoke club! This would be fun!

Unfortunately for them and for me (more them) they didn’t have many English songs on their books, so I respectfully declined, despite his very eager efforts I get me on stage!

While I wait for the fun to begin a group of 10 more people enter the bar and make their way to the back – obviously tempted by the drinks offer. Immediately the host and waitress come over to my table and tell me that they’re English and ask whether they’d like me to introduce them to me. Very sweet, but I didn’t really want to meet other Brits, especially ones that look so typical of holiday makers.. ( I’m sure they’re nice people). I declined and sat back in my chair.

And so began numerous passionate and slightly out of tune renditions of some Spanish classics – all of which involved mass audience participation! When the hen-party arrived I knew it was time for me to depart 🙂

Next day, (Sunday) and it’s time for me to move out of my hotel and in with my homestay family. Leaving the hotel bed behind was like that scene in Ghost where Whoopi Goldberg has to hand over the cheque for four million dollars to some nuns and she doesn’t want to let go…lol

But I made my way, via the subte (subway), and back-pack in tow to my new accommodation in the area of Recoleta. Recolecta is one of the nicer parts of Buenos Aires- it’s apparently where the rich and influential people reside, so I’d blend right in then….NOT! 🙂

I was met at the door to the apartment block by my host Liliana, who despite writing perfect English in our email correspondences doesn’t really speak any English at all. This would be fun! I got settled and by that I mean I got the Internet password from her, and began sending confirmation emails of my safe arrival to family and friends.

But I already had plans! I’d arranged to meet a local nearby who had kindly offers to show me the sights of Recoleta. (Again all sorted through Couch-surfer website – I can’t praise this website enough right now)

So a few miles later, we’d walked around most of the area, taking in parks, markets; the famous Recoleta cemetery – resting place for Evita – wandered around the art museum and downed a few cups of freshly squeezed orange juice!

I parted ways with my guide, Mariel, and made my way back to my apartment..after all it was only 7pm and I had plans that evening! 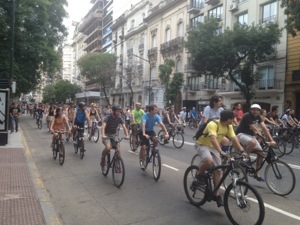