So just about to fall asleep and I do a last minute check of Twitter. European elections, more stuff on UKIP and then I stumble on #YesAllWomen It’s currently tending number with over 700,000 tweets from around the world! (At 3am in the UK)

It seems to have been started (well a catalyst at least) because of the terrible events in America where a 22 year old man decided to go on a killing rampage – after he was apparently shunned by some women http://m.bbc.co.uk/news/world-us-canada-27562917

The news is extremely sad, with six people losing their lives to this one man’s twisted actions.

But what I find just as distressing are the vast numbers of tweets written by women sharing their experiences of misogyny, disrespect, rape and general sexist abuse. I don’t want to believe what I’m reading – but unfortunately some of the stories ring true for some of my friends and acquaintances…

Reading the continuous stream of tweets became almost overwhelming… Here are a few: 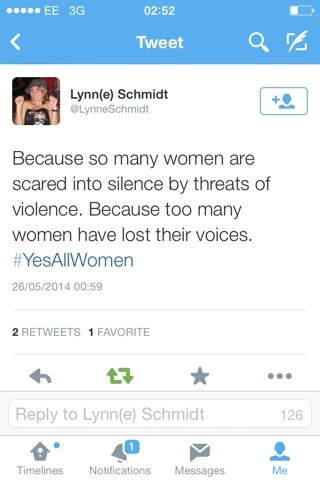 Reading some of these frank accounts of misogyny experienced by women around the world, sometimes on a daily occurrence really upset me! Why do some men choose to behave like that?

Why do we continue to live in a world where some stupid men choose to treat women so poorly and without respect? Obviously questions that we could spend hours debating.

Bottom line – It’s really time the men out there became even more vocal about these abuses, however ‘minor’ some might appear. With society force feeding young men and women the idea that it’s ok to objectify and disrespect women more and more each day, it’s really up to us MEN to stand tall with our WOMEN and start teaching these young men that young women are just as equal and deserve our respect… As for the older generations of men, lets hope that they’re not beyond re-education. Refreshing to see that some men already get it: 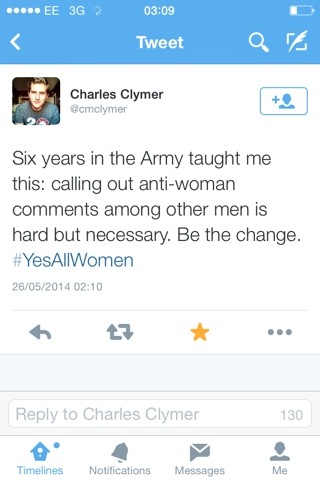 Guys if this trending topic doesn’t get you thinking about how you should be treating women, then try and remember this… We all have mothers!