As you’ve probably already imagined my time in Mendoza was taken up mostly with wine, and steak – the staple of any Argentinian diet!

Because of this I’ll fast forward to my trip to Cordoba!

In the guide books Cordoba is described as the second city of Argentina! However when I arrived at 6pm from airport it felt like anything but a major city!

The streets were empty for the most part and few cars cruised the roads….but oh how little did I know….

After unpacking in hotel – when taking my wash bag out – I logged on to my trusted couch surfer account to check whether the message I’d posted the day before had been picked up by anyone. (I’d asked if anyone was in town to show me around). To my joy (relief) a few locals had replied offering to show me around the city.

So I showered, put on a t-shirt (it was still very hot) and went to meet my first guide, Vicky. We met in my hotel lobby and she told me we’d walk around for a bit.. To be honest I wasn’t expecting much as I hadn’t been blown away by the cab journey, but literally two minutes away from my hotel entrance I was in the middle of a bustling plaza… It was full of people sitting, chatting and enjoying the coolness of the evening. On the corner of the plaza was a cathedral (this country seems to be full of them) It was a magnificent building, but the outside only served to draw punters, believers and non believers in through its doors!

Once inside we had to dodge the cameras – alas they were not for me, but for the bride and groom who were walking down the isle! We’d walked in on a wedding! A quick look around and we realised that we weren’t intruding… The couple had simply paid to use the premises… So I’ve now been to my first wedding in Argentina!!!

Trying desperately to stay out of the eye line of the wedding camera proved difficult, but was well worth the trouble as we walked deeper into the church. The artwork that adorned the walls was amazing! The structures depicting various scenes from the bible looked like they took hundreds if not thousands of man-hours to create! The cathedral itself apparently took a century to construct (check out some of the pictures).

After witnessing the wedding, we stepped back out into the warm nights air and continued our stroll around the city!

We neared main roads and immediately the noise and vibe of the city picked up. We approached a building that was illuminated by various multicoloured flashing lights – I though it was a disco of sorts, but it’s just a refurbished women’s prison that has now home to art galleries, restaurants and bars… It also has the most amazing water fountain – where the water dances to whatever music is being emitted from the speakers.

Crowds gathered round, enjoying the music and taking pictures… But then something caught my eye… Was I at a prom? I had to double-take because looking around, all I could see were girls dressed in prom dresses posing in and around the building – maybe there was a special party on tonight?
But there was no party – these young women were taking pictures for their ‘sweet 15’ birthday parties! I didn’t know, but a sweet 15 party is a big deal over here.. Families spend lots and lots of money, putting on a massive party to welcome their daughters into…. Womanhood….I guess…

Not quite sure that wearing an eighties through back prom dress from Teen Wolf, and sporting a fire-tastic perm is really selling the idea that becoming a woman though…. I could be wrong…

Anyway after making our way through he endless photographers papping these young models, we made our way to a great little restaurant with mammoth size portions!

I don’t think I’d ever seen a Milanese that big before – it was literally 24 inches… No lie ladies….honest! Lol 🙂

After getting them to wrap half of my food to take home…. My guide decided it was late enough (2300) to first go and take a siesta and then meet up for a drink and to check out the club/bars!

A couple things I should point out- my guide is an English language exchange teacher ( very handy) and Cordoba is a student town! Which means that every night is. Party night lol!

So we head to a club… And what can I say.. Expect the music was very David Guetto and Rhianna, with a mix of Cumbia. What can I say, expect after a giant glass of Cuba libre the night seemed to go pretty quickly – which means it was good! 🙂

When I eventually woke up the next day (i say the next day, but it was actually the same day i left the club – make sense?) it was off to meet my second guide for the weekend – Martin!

Now before I rush into my day tour, I’ll tell you that Martin is a student studying (my mind has gone blank)…. It feels like I met him a year ago, but it was only last week! WTH is happening to me – my brain is finally switching off! It’s only taken 3 weeks of sun and about a bucket of red wine 🙂

Anyway, I’ll remember soon… Martin meets me outside the cathedral and we walk and talk about Cordoba as we head towards one of its parks for some mates! The park is full as is always the case it seems in Argentina. We drink mate and continue to chat about everything. For only 21, Martin is a well rounded young guy with plenty to say on a variety of issues.

Anyway talk moves to walking and we tour even more of the beautiful parks that are buzzing! We also head to the arts fair – which is full of people. Stalls sell everything from plants, to trinkets, the obligatory mate cups, and anything else you can think of!

Finally after a couple more hours braving the sun and heat we head to little bar to quench our thirst with an ice cold beer!

The day isn’t finished yet though.. Later that evening Martin takes me out with his friends to an impromptu house party.. Two memorable things… 1) the melon with wine! Delicious! I’ll be doing that when summer roles round in London, 2) Chiropan – it’s like the Argentinian equivalent of a kebab, expect its a heck of a lot tastier! It’s basically a chorizo sausage grilled and put between a chunk of freshly backed French bread. It’s tipped with Salad (no chilli sauce lol) and that’s about it! Delicious!!!!

Now that we can see the sun rising, it’s definitely time for bed! 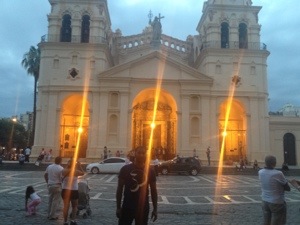 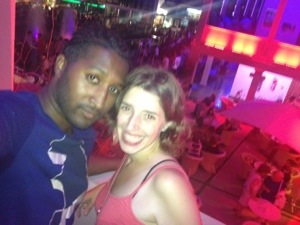 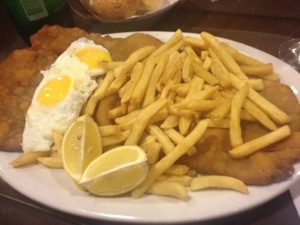 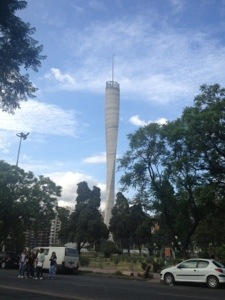 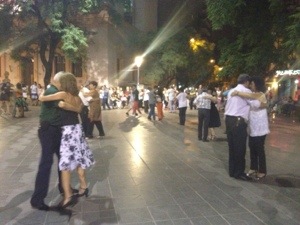